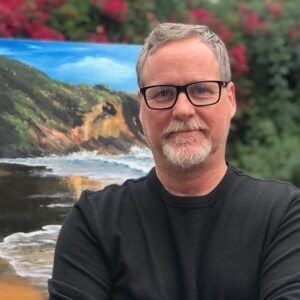 Randall Holbrook grew up in Huntington Beach, CA, and has worked his way south over the years eventually ending up in cozy San Juan Capistrano where he now resides with wife Therése.

Always doodling and cartooning, his father gave him an old painting box full of oils from his college days that is still in use today. On a trip to New York in 1983, a book by Anaïs Nin introduced him to the French Surrealists and the American expatriates in Paris of the 1930’s and was instantly attracted to the genre, still a strong influence in his work.

Randall is a member of the Southern California Artists Association. His art is in collections in California, Hawaii, and Utah.